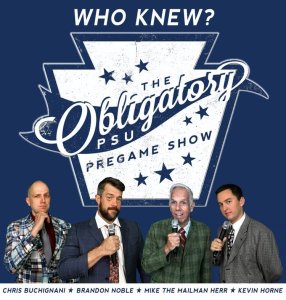 In July, the chapter partnered with The Obligatory PSU Podcast for a recording with Matt McGloin.  The recording from this event is now live and available for download by vitsiting this link:  https://share.transistor.fm/s/eef2eaf2

An interview with former starting quarterback Matt McGloin about his improbable football journey from walk-on to the NFL and leading the legendary "Iron Lions" of 2012.


Matt McGloin has had one of the most interesting personal journeys in Penn State (if not all of college football) history, arriving on campus without a single FBS scholarship offer, buried on the depth chart as a walk-on QB, and yet ascending to the starting role, setting school passing records his senior year, and then willing his way to an NFL career as an undrafted free agent. Along the way, he became a critical leader of Old State's most important and special team ever - the legendary "Iron Lions" of 2012. It was recently announced that Matt will return to Happy Valley this Fall as part of Penn State football's team coverage. Earlier this Summer, Matt joined Chris and Mike the Mailman at an event hosted by the Centre County Chapter of the Penn State Alumni Association to talk about his life in football and the challenges - both on and off the field - of weathering the storms of scandal throughout the 2012 season.